The song box from Pat Burgess 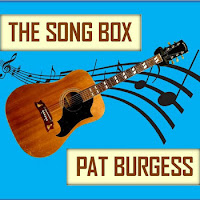 Thanks to Pat Burgess of the Rye River Band from Leixlip, Co. Kildare, for the welcome news that he has just released The song box, his debut solo album comprising eleven original songs, plus one Dublin popular song from the 'Mrs Mulligan' canon which Pat has in tradition from his late father Jim Burgess (who in turn inherited it from his mother, Teresa). The album title honours his favourite 1970s Suzuki guitar, shown in the cover art.

The song box is a more personal departure from Pat's work with the Rye River Band, and it showcases his confident songwriting and musical arrangements. Don't expect a bluegrass record (though several of the songs would fit a bluegrass treatment). Pat has been influenced by many leading singers, songwriters, and groups of the last sixty years, and this shows in the wide range of genres in which he is at ease. In addition to his own six- and twelve-string acoustic guitars, electric guitar, mandolin, and bouzouki, guest musicians contribute drums, bass guitar, accordion, pedal steel, keyboards, harmonica, violin, cello, and backing vocals. The album notes are admirably informative, including complete lyrics to all twelve songs.

The song box CD album can be bought in store from Tower Records, 7 Dawson St, Dublin D02 X688, and online at https://www.towerrecords.ie/. It is also available for digital download/streaming on iTunes, Apple Music, Spotify, Amazon Music, CDBaby, and BandCamp. Pat's dedication to making live music heard during the pandemic was shown in his series of 'Rye River Band Acoustic Live Stream' videos, all of which can now be seen on the Rye River Band Facebook.